I started writing short Consuming Journalism features on my blog years ago. I'm sure I tried to explain why I started writing it, but I'm not going to go back through the years and through several different blog platforms to find those explanations. (Bloggers, how do you keep track of years of posts?)

So why did I start writing Consuming Journalism? Easy - I needed a job. I left my USG job and loosely latched onto a startup in Seattle that crashed and burned. Oops. I started testing the waters in the freelance world. In post-fact America, I spotted the urgent need for more focus on media literacy and thinking about information more critically. I figured a few posts on an obscure, unread blog would land me an amazing position at Stanford or with Google. (Stanford and Google, I'm still available.)

If you're reading this, it means you're connected to the internet. You know that standards are falling in the ever expanding world of news and journalism. You know that your uncle shares wild, unsourced or poorly sourced information on Facebook and Twitter at 3a.m.

I didn't get on social media until late in 2015. I left it in 2020. When I got on social media it was an eye opener. People across the board were sharing information without examinging that information and questioning it. The Comet Ping Pong #pizzagate incident is one of the most well-known incidents.

In March 2016, the personal email account of John Podesta, Hillary Clinton's campaign manager, was hacked in a spear-phishing attack. WikiLeaks published his emails in November 2016. Proponents of the Pizzagate conspiracy theory falsely claimed the emails contained coded messages that connected several high-ranking Democratic Party officials and U.S. restaurants with an alleged human trafficking and child sex ring. One of the establishments allegedly involved was the Comet Ping Pong pizzeria in Washington, D.C.[6][7]

Members of the alt-right, conservative journalists, and others who had urged Clinton's prosecution over Clinton's emails, spread the conspiracy theory on social media outlets such as 4chan, 8chan, and Twitter.[8] In response, a man from North Carolina traveled to Comet Ping Pong to investigate the conspiracy and fired a rifle inside the restaurant.[9] The restaurant owner and staff also received death threats from conspiracy theorists.[10] ~ Wikipedia

I figured that was a rare, extreme failure of someone to think critically about the information they consume. Luckily it seems like it was extreme, but I'm not so sure about rare. Remember this?

Sounds ominous, right? Look at all that passive voice. Forced by? After being told by? Being reviewed by? Why is reviewed in quotes? Tweets like that took flooded the internet. Here's a tweet from comedian Sarah Silverman.

I've seen a few references to who first made the claims. Here's an excerpt from Raw Story on 6 March 2017.

Khizr Khan, the Muslim American Gold Star father who famously railed against President Donald Trump at last year’s Democratic National Convention, has cancelled a planned speech he was scheduled to give in Toronto after being informed that his travel privileges are “under review.”

Rosa Hwang, a senior producer at CTV National News, reports that Khan received word that his privileges were under review on Sunday evening. It is not clear from Khan’s account who has put him under review.

Every thing about those tweets and that article scream for further investigation and clarification. An easy test one can conduct before sharing something is to ask yourself if it sounds odd. Have you ever heard of or known a person who got contacted about their travel plans and told their travel privileges were being reviewed? I haven't. How would that work? Another test is to imagine someone asks you who is doing something and why? The only honest answer after reading all of the above would be something along the lines of I don't know. But Khan says they're doing it? Who is they? Someone in the USG.

Khan's claims fell apart. You can read about initial skepticism in this Washington Post article. In this 2019 article Khan changes his wording significantly and claims he was worried about having to turn over his laptop and phone at the border during a re-entry.

The Republican / MassLive.com asked Khan about his claims in a brief interview at the Sheraton Boston Hotel, where Khan was speaking at a Youth Congress event run by the Anti-Defamation League.

Khan responded that there have been reports of people who were harassed at the border, and there have been new regulations put in place. "I was informed that it was not safe to travel while these regulations are not fully explained to the staff at the border," Khan said. It was not immediately clear which regulations specifically Khan was referring to, but Khan went on to talk about the potential searches of his personal property.

Again, this should be basic stuff that even a 14 year old could handle.

When I write a Consuming Journalism feature, I'm interested in structure, logic, and sourcing. Are the sources credible and authoritative? Are there problems or inconsistencies? Have I got follow-up questions, things I want clarified? Where can I go to learn more? How can I test the claims?

This Daily Caller article about Hunter Biden's activities in Ukraine is a good example.

A quick look at my biases. The Daily Caller is right wing and was started by Tucker Carlson. The article will be anti-Biden, and, based on other Daily Caller articles I've read, it will be sketchy. My other biases. Hunter and Joe Biden should never have let this happen. I've talked about it before and can't summon the energy to talk about it again. I'd bet a $1 that most Americans look at that mess and would agree that the Bidens exercised extremely poor judgment. I can sympathize with people who view it as a form of corruption even if no laws were broken.

The article is a mess. It employs a lot of the same tactics and wording that the right has criticized in reporting about Trump World's connections to Russia.

The article relates primarily to "a highly anticipated report released Wednesday by two Republican-controlled Senate committees." It's heavy on innuendo and vague wording about activities and actions deemed suspicious. That seems to be the trend today - hint at the possibility of wrong-doing. The opening paragraph will give you a good sense of the overall tone and direction of the article.

"U.S. banks flagged suspicious financial transactions between Hunter Biden’s firms and Russian and Chinese nationals, including a businessman with extensive ties to the Chinese Communist Party, according to a highly anticipated report released Wednesday by two Republican-controlled Senate committees."

What does it mean when a U.S. bank flags a financial transaction? How often does it happen? What are the criteria for flagging. What happens after a transaction is flagged. Sure sounds bad.

I've added some emphasis in bold to some other vague wording.

The report asserts that the wire transfers, which total in the millions of dollars, raise concerns about potential conflicts of interest involving Biden, as well as “criminal financial, counterintelligence and extortion concerns.

The article does provide some interesting insights. Specifically, the author mentions that USG officials raised concerns about Hunter Biden's work with Burisma. I've read other articles claiming that Joe Biden's staff was afraid to raise the issue with Joe Biden, which seems ridiculous and frustrating. Someone muster a little courage. The problem with the Daily Caller article is that it remains too vague.

The report, which The Daily Caller News Foundation obtained ahead of its release, also states that State Department officials expressed reservations in 2015 and 2016 about Biden’s links to Burisma Holdings, a Ukrainian energy company that has been dogged by bribery allegations.

Vague. This gets more specific and leads to obvious follow-up questions.

One official, Amos Hochstein, told the Senate Homeland Security and Senate Finance committees that he said to then-Vice President Joe Biden in October 2015 that Hunter Biden’s position on the board of Burisma “enabled Russian disinformation efforts and risked undermining U.S. policy in Ukraine.”

A mix of vague and specific. What does Joe Biden say about Hochstein's claim?

Emails cited in the report show that Kent raised Burisma’s issues with corruption to other State Department officials. Kent also told the committees on July 24, 2020, that he said to Joe Biden’s national security staff in February 2015 that Hunter Biden’s role at Burisma “could create the perception of a conflict of interest.”

The article should clarify if "staff" was a group email label or if there were actual names of staff members included. Did this vague, nebulous staff respond? It's hard to tell with this wording, which very subtly suggests that Hunter's position might have influenced Joe Biden's actions. It is really subtle with the use of "avoided".

You get the point. The article portrays an environment or situation that smells of corruption and illicit activity. I'm not a student of journalism, and I have a terrible memory. I'm not sure if articles like these have a long history or if they're more a product of the last 10-15 years.

This paragraph is a doozy, and you'll probably be thinking like I did that it could apply to either candidate. (I have a childhood friend who, if he reads this, will criticize me for not discussing the Trumps.  That's where we disagree. We can discuss things without the corresponding obligation to answer "what about X" or "now do Y". This isn't a post about Hunter Biden or the Trumps. It's a post about looking critically at information that we consume.)

The report does not produce any direct evidence of wrongdoing on Hunter Biden’s part. But Republicans say the documents paint a troubling picture of Biden receiving “millions of dollars from foreign sources as a result of business relationships that he built during the period when his father was vice president of the United States and after.”

The "direct" qualifier is shady. Does it provide indirect evidence, then?

Still here? I bury the lede a lot. Another reason I started writing Consuming Journalism is because I started seeing calls for the tech giants to protect us from our fake news-sharing selves. That's an impossible task in a modern, free society. People and trolls add gazillions of articles and posts online every day. The only things that will save us from all the garbage is the exercise of critical thinking and restraint and a commitment to teaching critical thinking and media literacy to kids.

I've droned on long enough. The Guardian has an excellent article about how Finland does it.

How Finland starts its fight against fake news in primary schools

(Finland, beautiful Finland, here is my Search Engine Optimization SEO attempt to get the Government of Finland to read this blog post and decide that Finland needs to hire me for its English language media literacy efforts.)

Sirens and bangs have returned to Capitol Hill. On 22 September it sounded like the police turned every siren on in the city. I was working on some stuff at home and thought there must have been a 10 alarm fire somewhere. It's always 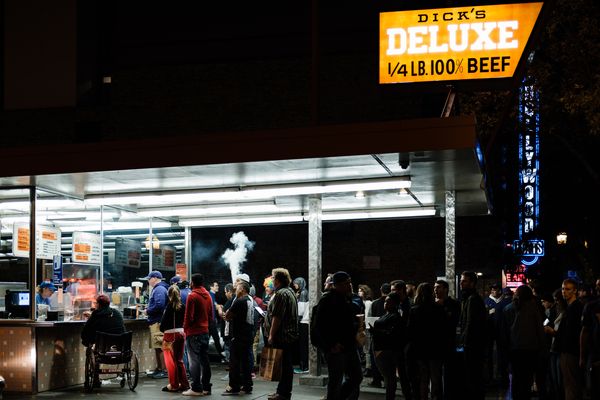 I'm looking through my archive for photos for a project, which inevitably leads to distraction. When I walk by Dick's on Broadway, I always take a photo. It's obligatory. One