He's gone, and I'm grateful. He was a con artist who conned a lot of people. 70+ million people disagree with me on that, so the math suggests that...I got a 33% on a geometry test once, I should never bring up math.

I stopped watching after I saw Trump fly away. Friends and family told me it was an uplifting event, and I'm happy for that. We needed it. But I didn't want to see the media's lovefest for Biden / Obama 2.0, and I didn't want to see the oohs and ahhs when Bush discreetly gave Michelle Obama another piece of candy. We like Bush because most of us know we enabled him with Iraq and torture. It's easier to celebrate his generosity with candy and his love of painting. Maybe the candy was soma.

Hmm, tone. I'm not trying for cynicism and pessimism. Oops, too late. I am very happy. I'm hoping that Biden has learned and grown since his last stint at the top. I'm a fan of Obama. Incredible president, wonderful family, and inspiring, but it wasn't a perfect era. At the end of his administration, we were still in Afghanistan, Guantanamo, and Iraq, our drone wars were murky as hell, we'd played interventionist, and the administration was heavy-handed with journalists.

We all should get a shot at growth, though, so I'll stop there. Too much to be happy for. We finally have a woman in the White House's elected positions. So long overdue. And three of the worst elected officials out there - Cruz, Graham, and McConnell - have a two year timeout.

Sorry, I opened this intending to post a couple of old photos and got side-tracked. There's a mechanic or car shop on Union that has a great garage door with Do Not Block written in orange. I love that building, and it's consistent with that area's auto history. I'm not sure if they overlapped, but I'd like to think they did. I bet the mechanics there would fix your Red Barchetta on a foggy day despite the Motor Law. (RIP Neil Peart. And with that I went down a Rush rabbit hole - this is a fun little interview with Geddy Lee. I've always loved Rush, but I always assumed Geddy Lee would be a little distant. This indicates otherwise.)

I've always loved the photo of the person walking by the garage door with headphones on. (One problem with editing is that you end up with "I've always loved" in almost back to back sentences.) It makes me happy, as does the other photo of a person walking by a different garage door. I call them garage doors, but that might be inaccurate. Just call it Fake News, for old time's sake. (In the Do Not Block photo, I'm still upset that I didn't lower the frame just a bit.) 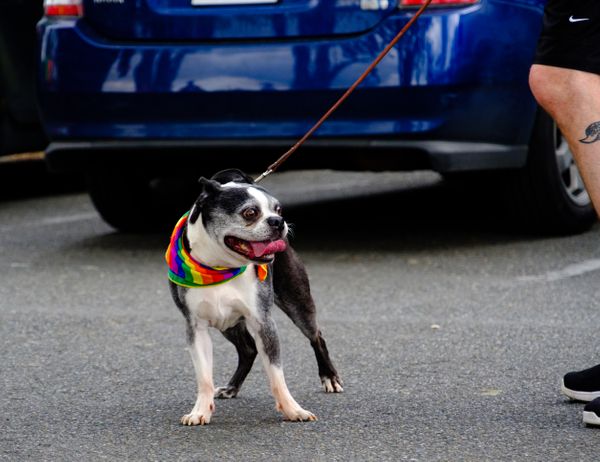 Always have a notebook and pen at hand. I thought about this post a lot tonight. I had some real pithy zingers. Those zingers have been relegated to the abyss. 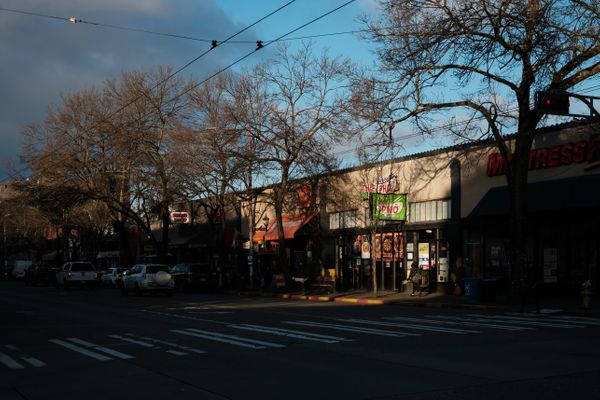 The fog has rolled in. I'm tempted to try for a last call photo of foggy Dick's, but I suspect the motivation will pass me by. One of my neighbors,