A beautiful spring day in Seattle. I made it out for a short walk. I'm in a walk rut. I need to mix it up. I go from I need to get out for a walk to I just want to get back home pretty quickly these days. It's not you, Capitol Hill, it's me.

My friends make fun of me for always having a camera bag / backpack. They're right. I'm trying to get away from that. It's not easy. I flirted with the idea of finding a park bench for some reading, but that meant taking a book (duh) and some glasses. This isn't rocket science here. I started eyeing that backpack. No, you've got coat pockets. And you know you're not actually going to plop down somewhere and read.

Off I went with just the camera...and a mask...and hand sanitizer. (This is a good place for me to point out that I am writing on an obscure blog about trivial, mundane things. 90 minutes on a spring day in Seattle against the backdrop of people dealing with a whole lot more.)

I headed to Cal Anderson Park. Tons and tons of dogs. I love watching them socialize. There must be a Facebook group or something - I just don't remember there being that many people and dogs in the park from about 1600 on in years past.

There were a couple of times today where a person and dog would call it a day, head off, and another dog would come running after them. Hey, where you going? It's still light out. It's hard to match the job satisfaction of a worker/athletic dog who chases down a ball or a frisbee and grabs hold of it between its jaws. Yea, I got this, no big deal. Slow strut ensues.

I could hear Maestro Pasquale playing in the distance as I tried to get the courage to take a photo of someone playing guitar by the big fountain thingy. I dillied and dallied and missed the shot.

Wandered over to the sad pond area that is greatly unsaddened by the ducks. I like watching them, but today saw an incredible, unexpected visitor. A woman pushed her stroller up to the pond. Inside was an enormous, curious rabbit. The rabbit was, momentarily, in awe of the ducks. She set the rabbit on the concrete ledge. After a brief wonderful moment, ducks and rabbit had seen enough and parted ways. I'm still kicking myself for not asking the woman if I could take a photo of the rabbit. It was huge. We have lots of rabbits on Capitol Hill, and I love seeing them out at night. If I bumped into the Cal Anderson rabbit late at night, I would probably back away cautiously.

Pressed on, into the Bobby Morris Playfield area. I made a point to mention the Bobby Morris Playfield area because Jason asked about the name and mentioned that he did some follow-up research. That kicked me out of my laziness and I did the same. There's a great history here of Bobby Morris. I love local history stories like this. It's worth reading or at least skimming. Seems like a life well-lived, and the photos are fantastic. My favorite sorts of photos.

Since I've mentioned Jason, I should also point out a great snowscape of his. It's the stuff of wintry dreamy snow covered streets. (Chuck, I hope you keep your blog. I'd sure like to see old Winston-Salem photos. TB, I hope you start one. Aplogies one and all - I'm sure the blog evangelism gets annoying.)

At 11th and Pine I stopped to watch Paul (I think that's his name), the hot dog stand chef, rocking out with his air broom guitar. That hot dog stand is definitely in the classic rock camp.

The witching hour approaches. If I had other things to add, they're fading from view. It might have something to do with the late night Chow Hall Eats. I may have done a number on a Heinz baked beans concoction. And before you fire up the pity party violin, Chow Hall Eats are heaven for me. (TB, I can't remember if I ever mentioned that I tried that canned brown bread next to the Heinz and loved it. If they made a version without raisins, it'd be perfect.)

I'll leave on a note of good fortune. I wandered around the Hill a bit longer. I ate a late breakfast at home, but I was due for some food. My modus operandi is usually to carry on with the indecisiveness until it changes to desperation. I very nearly got a slice at Big Mario's, but I held out for healthier. I zoomed straight past healthier and found myself speeding towards Hot Mama's. I ordered a slice of cheese.

You most certainly can.

I headed to the top of the adjacent car park and ate my pizza in the sunshine. If you ever grab a slice from Hot Mama's, I can recommend the view from the top. 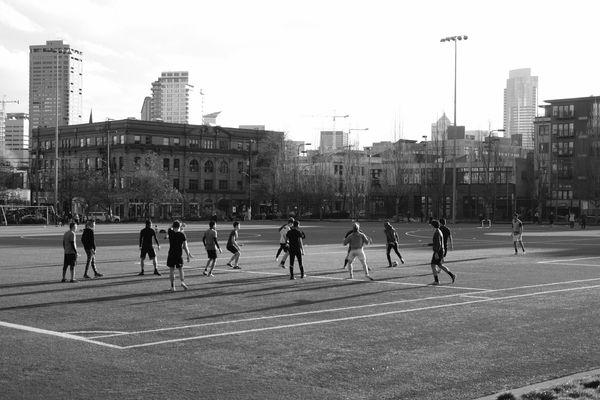 Spring in Seattle keeps you on your toes. In a span of 15 minutes it can go from hail, to rain, to brilliant sunshine. Layers folks, layers. (These photos are