We interrupt our regularly scheduled rambling to bring you the dumbyng down of Amurica.

Lindsey Graham: Hi Office Manager, anything we should know about?

Office Manager: Senator, your week is all mapped out, everything looks good.

Lindsey Graham: Great. But is that water flooding out of the bathroom?

Office Manager: Yes, Senator, it is.

Lindsey Graham: Isn't that something you might have wanted to warn us about? We have an important delegation visiting in 30 minutes.

Office Manager: We thought it best to project calm. We didn't want to cause a panic. We know, oh god do we know, you're fond of those gut buster breakfast burritos.

Thank goodness I have a fun but meaningless blog post teed up, because I am furious.

There is only one path to becoming a U.S. politician. Lie lie lie. All of them. Sorry folks, even the ones you like. Even the ones I like. The trick is finding the ones who, despite their lies, still work toward a tomorrow that is better than today for regular, every day Americans. I can't believe I used to be against term limits.

Woodward's book, Rage, is about to be released or has been released. There's a lot to be angry about, even with Woodward. But the absolute worst part of it is that Trump knew in January and February that COVID-19 was a bigly national security threat. He knew it could be spread through the air and that it was deadlier than the flu. He then told America it was contained, was going away, and was similar to the flu.

The subsequent lies are piling up. They think we're idiots. We probably deserve their scorn.

Fox News and its comments section sprang into action. This isn't a Consuming Journalism post, so I'm not going to dot all the i's and cross all the t's. Fox News did everything it could do to avoid that awkward part about Trump knowing how serious it was and choosing to downplay the risk. If it had been Obama, they'd have been apoplectic. How dare he! We're adults. If the levee is about to break, treat us like adults you paternalistic arrogant SOB. But it's Trump, so they've rallied behind Kevin Bacon in Animal House. "All is well, remain calm!" That's not a perfect reference, I just wanted to mention that scene.

I'm former military and USG. I worked with so many people who memorized the right sayings. One of the most popular was bad news doesn't improve with age. I scanned the Fox News comments and saw several people pointing to their military service and claiming that we're all gonna die! just ensures that we all die. That's how dishonest and dumb we've gotten. A sober fireside chat explaining the seriousness of COVID-19 is not even close to we're all gonna die! It's much closer to bad news doesn't improve with age, let's get on with it.

We're in the final stretch of choosing between two lousy candidates. I'll take the one who believes in climate change and good governance. If he and Harris embrace their neocon warhawk supporters, I'm done. Out of here. Well, figuratively speaking. No one will let Americans in, so out of here probably means a small town in Arizona.

Onto the regularly scheduled programming.

If you're new here, welcome. You probably searched on most influential influencer or world's greatest food blog and landed here. That's how most people find me. And despite the political rant lead-in, I'll get to it and not leave you hanging.

Nasoya Tofu Vegetable Dumplings. Damn, those were good, and easy. Skillet, some oil, 1 to 2 minutes on each side, add a 1/4 cup of water, cover skillet, 3-5 more minutes. Delicious. I chucked in some garlic before I put the cover on for two reasons: 1) I'm an incredibly talented home chef who has read an article about a James Beard award-winning chef and 2) I'm a jackass who opened the package and realized I didn't have soy sauce, chopsticks, or saké. Does saké get the accent over the e?

I'm all about integrity here. This site isn't sponsored (yet). (Nasoya, let's take these dumplings to the next level, give me a call. At least 30 people per month read this blog. I'll give you a few days to run the very obvious math. Cha-ching.)

There's a special place in hell for couples who take up the whole sidewalk and make no effort to make room for someone walking towards them. If there's not room for three, I step into the grass or street and think, have a nice day assholes.

I've fallen for audio. Cool microphones, pop filters, looking up the term plosives and fricatives. I kept thinking people were misspelling explosives. I still don't know what it means, but I think my audio is almost surely lousy with plosive and fricative landmines. And jesus, my s's - I sound like a snake.

I think I've actually gotten to a very low-level proficiency with audio. I can do the basics in Adobe Audition, and I can combine mics, recorders, and USB connections to produce audio. I have a lot to learn, but I'm enjoying it. I'm close to buying a portable interview mic that I'll probably spend the rest of my days thinking about interviews I could be doing.

Yesterday I went out for an early(ish) walk and took three instant cameras. My intentions weren't complicated. I wanted to compare the formats and tinker with some of the settings. I took a Polaroid One Step Plus, an Instax Square, and an Instax Mini. I also added some running commentary with Rode Wireless Go mics and an H1n Zoom. When I got home, I added an intro with a Sennheiser (I think) mic to get a better feel for the audio differences.

I've included the audio. This isn't an attempt at self-deprecation. It's pretty stale for anyone other than a Capitol Hiller. I'd skip it. I've included it because it's the first time I've added multiple tracks to a recording. Maybe not the first, but the first time I actually thought I knew what I was doing. I've also added it because I need to figure out where to host audio. Soundcloud's free service was awesome, but it's not geared towards me. Exploring. And to do that, you've really got to upload something.

My audio was wrong right off the bat. I thought I was walking into a beautiful day. Turns out our air is smoky and hazy from the fires. Which fires? Oh boy, this is embarrassing. I thought they were from the California fires. I haven't done a lot of good documentary photography work, but one area I latched onto was fires. I can't believe I tuned out with respect to the local Washington fires. Yet another reason to pull away from the obsessive reading of COVID news.

(Photography is a constant battle with frustration. I used one of those rocket blower thingmajigs on the photos and the flatbed scanner, but a quick look at the photos made me think there was dust on them. But it appeared on all of the photos, which were from different cameras, meaning different lenses. Turns out there's some almost impossible to see residue on the flatbed scanner. The don't use cleaners on scanners crowd can say I told you so.)

A couple of days of testing. Cameras, mics, audio platforms, and...affiliate marketing. How many of you are familiar with affiliate marketing? I'm a newbie, and I'm exploring it as part of the how to survive as a freelancer toolkit.

There are two main takes on affiliate marketing. 1) You're trying to get me to buy things so you can get rich. 2) You use this product, and you're mentioning it in case I'm interested in this product. If I buy it, you get a kickback, a kickback that doesn't affect the price I pay.

I'm not a fan of the company, and that's because I think they avoid taxes and could have easily avoided being just another all growth all profit company. And yet I signed up for their affiliate marketing program. I don't like oil companies, but I have a car. It was an educational step, you can believe that or not believe it. If I can figure out the mechanics, my plan is to switch to smaller, local businesses. (I've included two affiliate network links below. I'm just testing out the program. If you want Woodward's book or a Polaroid One Step Plus, buy local if you can.)

If I decide to sparingly make use of affiliate networks, I'll figure out a way to post a reminder along the lines of -

I will never recommend buying a product. Despite being a flailing documentary photographer, I subscribe to the ethics - National Press Photographers Association AP's code of ethics, etc. In 99.8724% of known cases, not buying something leads to increased happiness. There are exceptions. Books, a comfortable pair of shoes, a dog, and NSFW thingamajigs from your favorite NSFW shop. Your instincts should scream don't buy it.

But I'm exploring the option of including an affiliate network link in case you've been thinking about buying something.

Still lots to figure out with this online world. But I say again - when in doubt, don't buy it. Sell it, give it away. Don't be owned by your possessions. 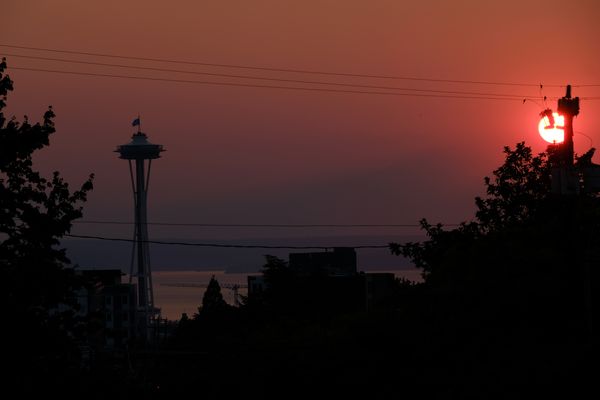 The West is on fire. I knew about the California fires, but I somehow ignored the fires raging through Oregon and, to a lesser extent, Washington. On a walk the 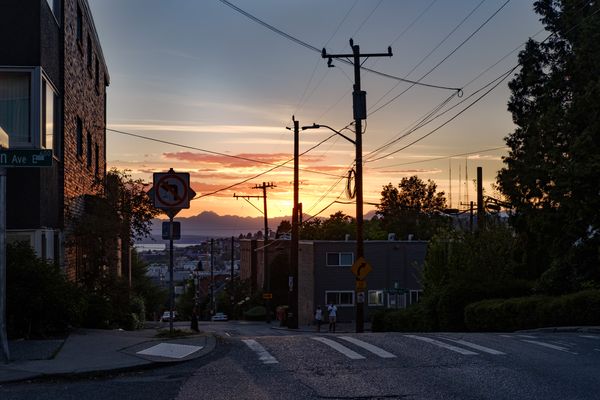 English muffins are like tortillas. Straight out of the bag they're pretty gnarly. You can't convince me otherwise. Today, late afternoon, I needed a snack. I also needed a little