I know I can be a downer sometimes. I blame some of it on the medium. I think if we were sitting down having an actual conversation, it would come across more as questioning and searching rather than the sky is falling. Even though the sky is falling. I'm going to talk about a couple of downer things here, briefly, but I'll start with the good stuff.

Do you like word games? If so, I recommend looking into The New York Times' Spelling Bee. It is fun. But you are warned - it is addictive. Here's the gist. There's an outer ring of six letters, and one letter in the center. You try to make as many words as you can. The catch is that every word has to include the center letter. There are ranks, but the only one that matters is Genius. Some people try to get to Queen Bee (all possibile words), but I usually stop as soon as The New York Times tells me I'm a Genius. I feel seen.

It really is addicting. There have been a few times that I've been out, playing the game, and have had people stop and ask how many words I've found. I see a few of those people fairly often in the neighborhood, and that's usually the start of the conversation - Genius today?

Here's where a mea culpa comes in. My dad's a math and numbers guy. He's got a lunchtime Sudoku ritual. For the longest time, I thought, that doesn't seem all that exciting. What's the draw? And now here I am, discovering the joys of word puzzles.

It's not free, but I think the subscription gives you access to all of their puzzle games. Not a bad option to have up your sleeve when you're waiting for a train or sitting at an airport.

Anyone who has read my blog (I've accepted that it's a blog, and not a collection of my genius essays on the state of the world...I'm only a Genius in Spelling Bee) knows that I'm a fan of taverns. Bars, pubs, gathering places - give it a name. My overall enthusiasm for them is dwindling some. I get talked to a lot, and it seems to be increasing. Talker-aters see a person sitting alone and they can't control themselves. Chum in the water.

(Lazy paragraph break here. I don't care.) But there are two Capitol Hill spots I will always love going to - Corvus and Nacho Borracho. (The other neighborhood spots are wonderful, too, but I only need two places with great staff.) I ducked into Nacho Borracho tonight at about 5 for a beer. The next hour served up reason numbers 7,245 and 7,246 why I like neighborhood spots. That's not accurate - these are repeats from the top ten reasons. Doesn't matter.

Good bartenders can set the groundwork for good conversations among people at the bar. Phil did that tonight. I met an interesting guy named Manny who lives in Tacoma. He was in Seattle for a Sounders game. He's 27, and he has his act together. He's working for an educational non-profit in a good job, lives with old friends, is saving money, and he's going after his dreams of becoming a firefighter, first in wildfires and then in municipal firefighting. We have a shared interest in photography and Berlin. He knows that firefighting might not work out, so he and his girlfriend are also exploring options in Berlin.

I told him that I envied his disciplined approach to planning. Yea, I have a plan, a backup plan, and a backup to the backup. I've always been that way. Think maybe it helps me manage anxiety.

While I was talking to Manny, the folks from T'Juana Tacos (they run the kitchen at Nacho) asked me if I wanted to try a fish taco they're considering for the menu. I very enthusiastically said yes. It was delicious. I know my limitations when it comes to talking about and describing food, but I think I'm pretty good at knowing when something hits the spot and tastes good. That's a good fish taco. And they are the nicest folks. I'm going to make an attempt at some Search Engine Optimization here, I wonder if it will work - if you're looking for great food in Capitol Hill, Seattle, check out T'Juana Tacos at Nacho Borracho. It's right across the street from the Capitol Hill light rail station. (If there are any firms in Copenhagen or Berlin who need a flailing documentary photographer blogger taco lover, hit me up.)

I just found "deft" in Spelling Bee. Still not enough for Queen Bee. It's always a little painful to check yesterday's solution. How did I miss that one?

I wish my neighbor had a chalkboard on her door listing the daily meals. I guarantee my hallway smells better than yours. If she offered takeout I'd never leave my apartment.

OK, now for the bummer segment. I'll keep it short. It's late, I'm not a lawyer, and it's a charged topic. Rittenhouse. I didn't watch the trial, but I read about it in depth. We're in a bad spot. I don't fault the overall verdict, which adhered to the laws we have in place. But there's a gap between the letter of the law and why the hell are wannabe paramilitaries showing up on the streets with assault rifles. It's a sickness, one that inevitably leads to violence. Farhad Manjoo has an interesting piece in The New York Times about the role that Rittenhouse's weapon played in that tragic night. Spoiler alert - the gun crowd uses a lot of circular logic. Madness. (Yes, I know that AR doesn't stand for assault rifle.)

I'll close with some happier thoughts and links.

I love thinking and reading about food. I've gotten lazy with my diet, and I want to swing things back towards more plant-based foods and fewer plastic containers. I think we're past individual decisions accounting for much, but I'll still feel better across the board. I stumbled on a great article about Frances Moore Lappé, an early proponent of plant-based diets.

Do you like music and photography? Read this wonderful article about Mick Rock.

Have you ever been to Senegal? I haven't. But Angela Flournoy's article about Senegalese (sp?) rice makes me want to visit and eat all the rice and fish dishes I can get my hands on.

I'm eating too much and exercising...let's call it infrequently. I know it's winter, and PNW winters encourage big bowls of soup and stew mopped up with bread. Mmmm, bread and soup. But this is getting out of hand. The belt buckle never lies. 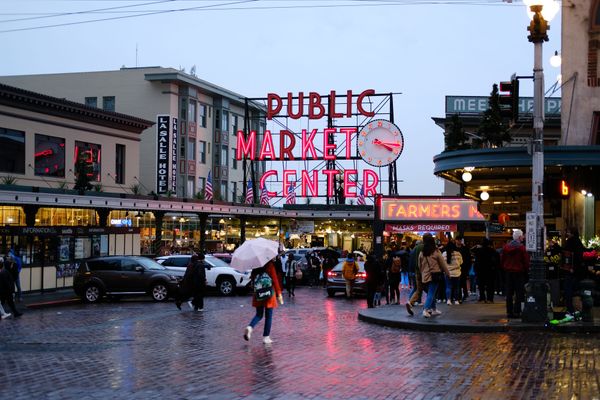 Well, I sure dropped out of sight for a while. I think the pandemic and a lot of other depressing news caught up to me. I just wasn't excited about