Went west yesterday. I wanted to see the sunset and the sound. I was also thinking about getting a beer and an appetizer at a Pike Place Market brewery that has distanced outdoors seating and possibly the best natural ventilation system in Seattle (note: I am not a scientist).

I took a camera and a GoPro. I may end up regretting the GoPro purchase. Not because of the product. It seems great. But I keep flirting with video without really committing or figuring out what I'm interested in shooting. Vague ideas, and they all have to do with other people and places. Probably can't avoid turning the camera on me every now and then, but believe me, that's one story I have very little interest in. Especially after almost a year of isolation.

Also, video is hard! I'm not a fan of YouTube as a platform, but you'll never hear me criticize the skills and the work. If you're on YouTube and find yourself enjoying a video about someone visiting Portland and getting a favorite burrito, there's a lot more work and expense that goes into that than you might think.

At about Speckled&Drake / Knee High Stocking Co. I questioned whether I should press on to Pike Place Market. It was almost 1500, and the sun is setting here at about 1615 these days. Downtown Seattle is a ghost town on Sundays, and I wasn't so keen on a dark walk back up the hill with my camera gear.

The pandemic does things to the psyche, I'm sure of it. It doesn't help if you've watched too many (not possible) post-apocalyptic movies. A dark, ghost town Seattle with leaves and paper bags blowing this way and that down the streets is enough to make you start seeing zombies.

I'm glad I pressed on. Just because tourists flock to Pike Place Market doesn't make it a tourist trap. It's a vibrant city unto itself. Even now, amidst all the suck, it will improve one's mood. And it was great looking out on the water. I envied the people in their sailboats. Being out on a boat must be a wonderful hour or two of escape from the pandemic.

I didn't go to the brewery. Too many people. Again, not a scientist, but my guess is that their spaced out tables are as safe or safer than my trips to the grocery store, but I still figured I'd leave it to the younger ones. If those older folks who'd guilt-tripped me into walking to Pike Place Market had come along at that moment and sat down for a round of tequila shots and beers, I would have defiantly told them that I would not fall for their peer pressure tactics.

The promise of sunlight drew out a bunch of photographers. It's often a solo sport. I like watching them go for their shots. What did they see? What are they shooting?

I was hungry. Really hungry. I went to a famous Seattle cheese place for mac and cheese. I've wanted to try it for a long time. It was ok. But just ok. I'm not naming the place because negative reviews aren't my thing. The people were really friendly. And it wouldn't be a fair review. The person warned me that it was a fresh batch, and that I needed to let it cool. I may not have waited long enough. And finding a little spot to eat out in the wild during a pandemic isn't fun. I sat in a courtyard, figured I'd dump half on me, and fumbled with my mask a few times as people walked by. I think I'm also on team macaroni or shells vs. penne for mac and cheese. I would happily go back for a second test in more favorable circumstances.

I started making my way back to the Hill. The light lingered longer than I thought, which was nice. No zombies. Oh, I have some photos. I should put them in now.

Still here? I've been to Whole Foods 4 times in the past 2 weeks. That probably makes 5 times total the past year. I've been walking that way more recently, which probably explains it. But you can also consistently find tinned mackerel there. You can sometimes find it at QFC and Safeway, but usually the only option is the canned mackerel, which I'm wary of...based on zero actual evidence.

Whole Foods carries Patagonia Provisions, and their tinned mussels have become something of a guilty pleasure. They're a little expensive, but if you're a normal eater, you can combine one tin with chickpeas and pasta (or bread) for 3 meals. I'm not disciplined, so I get about 1.5 meals.

I don't mind paying a few extra bucks for Patagonia stuff. I like the company. Yes, they're a company that relies on profits like any other company, but I think there are differences. I think they treat their employees fairly, they back their products, and they're advocates for the environment.

I used to steer clear of including any personal thoughts on companies or products because I harbored dreams of getting scooped up by the New York Times for photojournalism. I still brush up on NPPA guidance, but if I continue with photography, it will probably remain in the realm of independent blogging, freelancing, and documentary photography projects. I think the golden rule is transparency, which is easy. I like Patagonia. They're not paying me to say that. If they read this site tomorrow and say, gosh, Scott's bad sense of humor and average photos are exactly what we need for our company, I'd probably accept their job offer. (If the clock rewound and it was 2016 again, with me freshly arrived in Seattle, I'd tell myself to try for a part time job at Patagonia. I know retail is grueling, but I think that's a company I could work for.)

I miss my old neighbors. A nice couple with a rambunctious dog who left apartment living for a house in Magnolia. Crazy kids! But the new neighbor is not a downgrade. Holy cow, she could open a restaurant. The hallway always smells of delicious food. I'm dying to know what she cooks in there.

Egads this has gotten away from me. I bought a baguette at Whole Foods. Always a mistake. As I've mentioned, I'm not disciplined. A tin of mackerel and some olive oil helped make short work of that baguette. Dreading tomorrow. I'll wake up feeling like I swallowed two bags of sawdust.

The Capitol Hill Seattle Blog/blog folks give us an example of how to do local journalism and the importance of local journalism. It celebrates and champions a wonderful neighborhood while also putting tough questions to city government. It's not easy or lucrative. If 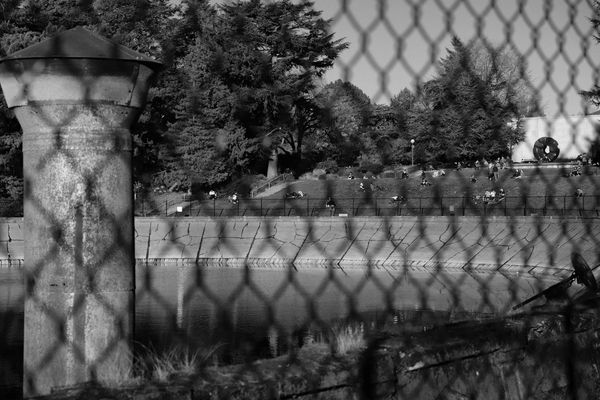 Today started well. Beautiful day in Seattle. Warm, sunny, with some defiant trees resplendent. Tally-ho, to Volunteer Park, with haste! My unscientific observations tell me yet again that Capitol Hill,